Sadhguru – “Right now the number of people practicing yoga is growing in a big way. This could be simply because the scientific community is slowly beginning to recognize the depth and dimension of what this is. But if improper, distorted kind of yoga spreads, in fifteen years’ time, scientific studies will clearly come out and tell you in how many ways it is harmful to human beings, and that will be the downfall. There are certain dimensions of this that are almost absent in the world today. It is there in some places, but generally in the known places, it is absent.

So, it is important that we bring back classical yoga as it was. If it is taught in a proper atmosphere with a certain sense of humility and inclusiveness about the whole process, it is a really fantastic process of shaping your system into a fantastic vessel, a fabulous device to receive the Divine.

It is a very powerful way of living. Power, not over somebody else; it’s all about power to access life.”

This was just before the first International Day of Yoga in June 2015 and I was in the ashram for the annual upgrade for Hatha teachers. 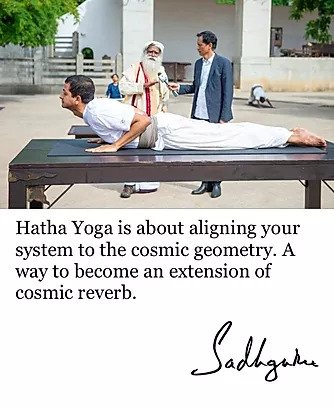 Sadhguru was being interviewed by a major news channel and a few of us Hatha Yoga teachers were all spread out in the large space in front of the Dhyanalinga and asked to do different practices. You can see a couple of them in the background.

At one point, he started talking about some of the dangers of improper yoga and how it can be harmful. So he asked Swami to get someone to demonstrate. I think I was nearby so Swami called me.

Just before I started, Sadhguru was explaining to Swami what he wanted me to demonstrate and he looked at me and said ‘Can he do it?’ and started laughing out loud. I somehow gathered courage to mumble a yes sheepishly while going through a mixture of complex emotions and trying not to show it.

We proceeded to demonstrate a few common corrections in some asanas. In this particular asana, the hands should not be used to raise the body up, which is what I was demonstrating.